Maidens eye district title and beyond 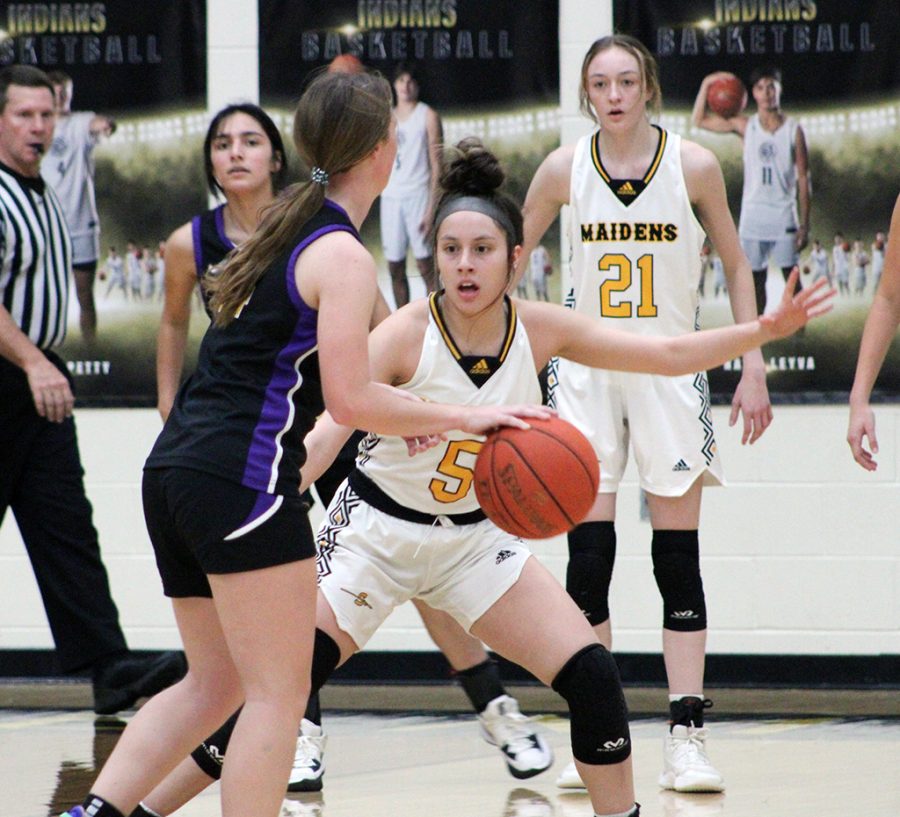 Not through here--Senior guard Xoe Rosalez protects the lane during district play with Pecos. Rosalez racked up 26 of the Maidens' 98 points against the Lady Eagles.

As the Maiden basketball team continues its quest for a chance at the state tournament, they are riding a 23-6 record, ranked in the top 20 in the state.

“This season is going exactly how we want it,” sophomore guard Londyn Shain said. “We have lost some games, but we have worked harder to get ready for district and playoffs.”

After a 98-17 win over Pecos to start the second half of district, the Maidens average 90 points a game in district and allow 30 points to their opponents. Granted, the district does not present a challenge to the Maidens, so Coach Tri Danley packed more punch into the preseason where the team faced more 5A teams. It was a calculation which has paid off for the Maidens, honing their skills under the leadership of their three seniors.

“The three seniors in this team, including me, want to win our very last game of high school before we graduate,” senior guard Jaycee Escoto said.

Bringing the team together has been the biggest challenge, but the seniors stepped into the leadership role and helped the younger players be a part of the varsity team. This included senior guard Melody Martinez who joined the team after moving from Haskell.

“We struggled by not having very good chemistry,” Martinez said. “With me being new, and a lot of girls being young, it was a struggle to learn to work all together.”

The team bonded on and off the court with meals and bus rides. This let the players build better relationships and reliance on each other.

“We have learned to work better with each other,” Escoto said. “Adjusting to our lack of height has been a struggle, but we continue to take this disadvantage and make it something that can help us.”

The wins and losses have helped the team keep their feet on the ground, showing them that struggles still exist but the motivation to correct them.

“Losses are never something a team wants, but at the same time losses help us figure out what we need to work on to accomplish the main goal for this season,” Shain said. “Wins are definitely a great thing, and we capitalize on beating teams that will get us ready for the playoffs.”

As the team continues to improve, the Maidens get ready for their biggest obstacle in district.

“Greenwood is our biggest competition,” senior guard Xoe Rosalez said. “They match up great with our defense.”

The Maidens defeated Greenwood, 74-48, in the first round of district, and to claim an outright district title, they must defeat them again on Feb. 8 in Greenwood. The district title would assure the Maidens a spot on the play-off bracket which avoids powerhouses Canyon and Argyle until the region final.

The Maidens will host Fort Stockton on Friday at 6 p.m.