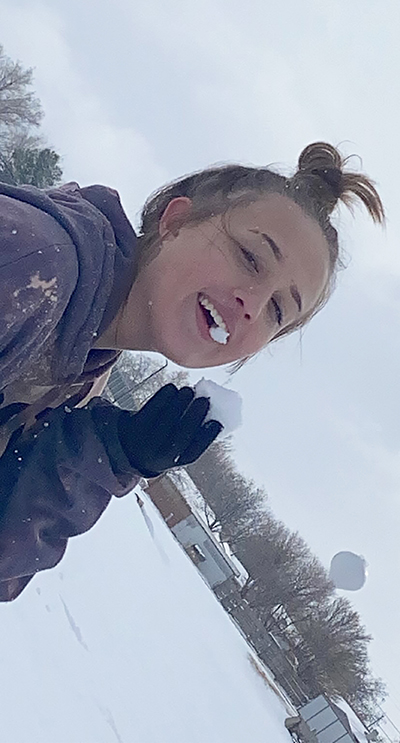 Fun frolic--Sophomore Emily Archer gets a taste of snow on Jan. 11 after Superintendent Kyle Lynch called off school. “I’ve always loved going to play in the snow. Something about it always makes it look so magical,” Archer said.

After half a foot of snow on Jan. 9-10, Superintendent Kyle Lynch sent out a message via Parent Square that due to the snow, school would be canceled on Jan. 11, saying he believed students deserved a break. The free Monday was the rarest of occurrences–a snow day.

“When I heard it was going to snow I didn’t believe it would,” freshman Andraya Armendariz said. “Usually when people say it’s going to snow, we only get a little.”

“I was really happy we had a snow day because rarely do we ever get snow especially that much,”  senior Parker Freeman said. “Also we didn’t have school which was very exciting.”

Students did not have to switch to virtual learning for the day.

“I was thankful that we didn’t have to go to school or switch to online,” Armendariz said. “It was nice to be able to enjoy time off from school and most importantly the snow.”

Lynch encouraged students to spend time with those close to them on their day off.

“My snow day consisted of playing in the snow with my friends and family,” Armendariz said. “We made lots of snowmen.”

For senior M’Kenzi Rodriguez, the snow was a perfect backdrop.

“I went and took pictures because it rarely snows in West Texas,” Rodriguez said. “It’s kind of like when we get rain; it rarely happens, so we might as well take advantage of it.”

Students returned to school on Jan. 12.