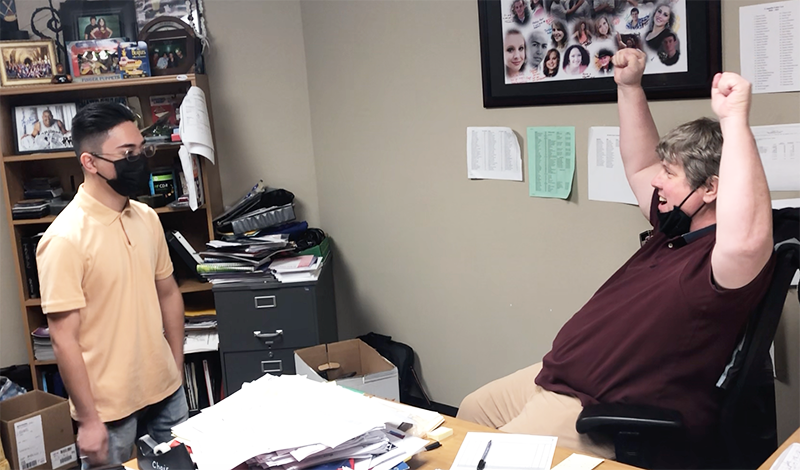 I got in-- Senior Moises Ybaben Burciaga tells his choir Director Eric Hindman that he was accepted into the University of North Texas Music Program. Ybaben Burciaga, a two-time all-state choir member, auditioned for both UNT and Texas Tech.

Most people would agree that being evaluated is very nerve-racking. When it comes to auditions, it is no different, especially for the college level.

I auditioned for a college music program for the first time for two colleges. The University of North Texas is the home to an exceptionally-skilled and highly-regarded music program, with only 16.6 percent of applicants being accepted. Texas Tech University possesses a well-known music program with many opportunities for its students, such as 100 percent job placement after graduation. Auditioning is very intense because the very moment you begin to sing determines your future.

To audition for UNT, I had to apply to the college first and then the college of music. You must be invited to audition, and the way they select the auditionees is through a preliminary screening where I had to record myself singing two songs, an aria in a different language and an art song in English. My two chosen songs were “Vittoria Mio Core!” by Carissimi and “Whither Must I Wander” by Vaughan Williams. From those recordings professors decide whether to invite you to audition. Excited was an understatement when I received the news that I’ve been invited to choose my zoom audition date.

When the day came for my time to audition, I found myself quaking with nerves, looking at the website page with big bolded letters, “Eight auditions before you.” The number kept decreasing as each time a sharp, anxious feeling zipped through my body. As soon as “Three auditions before you” popped up, the zoom meeting started earlier than expected. There on the main screen was a group of one woman and 10 professionally poised men watching within the windows above her. She welcomed me and asked me to introduce what I was going to sing and then to start. My legs shook a bit with the thought of skilled professors and voice experts judging my performance. As I was singing “Whither Must I Wander”, I recognized myself losing my consciousness of  my surroundings to the music. Despite my shaking legs, I sang the song with genuine meaning. This experience was unique from any other performance I’ve done–the adrenaline feeling compared to none of my past auditions. After they thanked me and kicked me out of the meeting, I could feel my stomach start to hurt from using my diaphragm to support my voice and limit the nerves. I felt content with my performance and waited for the next round confidently.

The next step was my interview for the music education program. “Four auditions before you.” Just like before, the meeting popped up, and I was placed in the waiting room for the music education interview. In this round of auditions, the music education faculty used my  career hopes to get to know my  personality and intentions of being a student. As the three professors appeared on the screen, I put on the biggest smile I could offer. They asked questions about what my plan was for majoring in vocal performance and music education. “What is a specific choral song that is your favorite and why?” one of the interviewers asked. I immediately responded knowing it was the hardest question you could ever ask. I answered the song “The Seal Lullaby” by Eric Whitacre because the song had inspired my passion for music to blossom. All three of them smiled and listened carefully to what I had to say. The interview did not last long–as soon as I finished speaking, one of the interviewers directed me to the link for the next round, sight reading.

The sight-reading part of the audition shows how much skill I had in reading music. I stayed in the waiting room for about 45 minutes; the wait felt like an eternity. As I sat in my chair half asleep, I opened my eyes for a second, and I saw the meeting starting up. I instantly jumped to my feet and smiled. I would be given five different sight-reading exercises–each one progressively getting harder. There was only one person in the meeting, a man who played the piano. My instructions were that I was going to be given 60 seconds to practice the score after he played the key, and once the time was over, I must sing. I had one chance to do one of them again; it could be any of them, but only one retry. The first three exercises were  simpler but still challenging, and I sang all three exactly right.The fourth one came, and it was tougher, with eighth notes all through the piece. I sang through it with multiple mistakes in notes and rhythm. Knowing the fifth one would be even worse, I decided to retry on the fourth. As I practiced and reviewed the piece, I grew more confident. I sang through it exactly right the second time. As my eyes glanced at the fifth score, I knew I was not going to do well on it.. After the man had played the key, I still had no idea what key it was in. It was filled with eighth notes, jumps, syncopation, and both flats and sharps. I spent the entire practice period trying to figure out the first two measures out of eight. As my time ran out, I felt hopeless. There was no possibility I was going to be able to sing it. I sang the first note and tried to move forward; I lost my pitch and continued to try. Within a few seconds I decided to finish. “Okay that’s all the torture I have for you today,” the man said. I left the meeting and the audition was complete. I felt delighted with my performance and spent the rest of the day confident in my abilities and my audition.

One week after the UNT audition, the TTU one came swiftly my way. Having auditioned before, my nerves did not come up until it was almost time for me to go. I entered the webpage and  “11 auditions before you”, was on the screen, and I waited for instructions. A lobby meeting popped up with a few people in the zoom call and told the instructions. Sight reading, singing, and interview would all happen in the same meeting room in front of every voice professor and teacher in the department. Sight reading would be faster; a professor would play the triad and the first note, and I must start singing it immediately. My nerves went on high alert to know I only had one shot with no practice time. The meeting ended, and I glanced at the screen “four auditions before you,” the auditions were going quickly.

Forty-five minutes later the identical words remained on the screen, and my patience turned into panic. I feared the worst, that the website was glitching and that I was going to somehow miss my audition and continually refreshed the page. As I was about to refresh again, “three auditions before you” popped up and my fear was washed away. The number decreased at a faster rate and eventually became “zero auditions before you.” The zoom meeting came up, and I finally entered the meeting that I had been anxiously waiting for. As soon as I entered, they greeted me and asked me to prepare for sight reading. The musical score was shared to my screen and after the professor asked if I could see it, she played the triad, and I began to sing instantly. The piece was simple, and I sang through it successfully with no hesitation. I received a huge thumb’s up from all the judges and moved on to the interview.

The same base questions were asked, and I responded to them just as confidently as I did before. Next the time came when I had to introduce what songs I was going to perform, I sang the same two songs. As I sang, I concentrated the best I could on the music. As I began to sing the third verse of “Vittoria Mio Core!” by Carissimi, the professor held her hand up and cut me off. I stopped singing, and the professor said that was all they needed to hear. I still don’t know that cutting me off was a good thing or a bad thing. The professors smiled and complimented me on my all-state achievements and informed me that was all they required of me. After waiting three hours, it all came to those five minutes, and it was done.

Auditioning for a college music programs was more intense than I thought it would be, but also very simple compared to what I thought could have happened. I auditioned as confidently as I could, and I feel truly content with both of my auditions. Very soon the results for TTU will come. Three days after my audition for UNT, I received a letter stating “Upon the recommendation of the faculty… you have been admitted to the College of Music.”

I am beyond grateful and excited to have been successful in my auditions and being able to pursue my dream at the college level. I am prepared for a new challenge and learning to be mean and green at the same time.