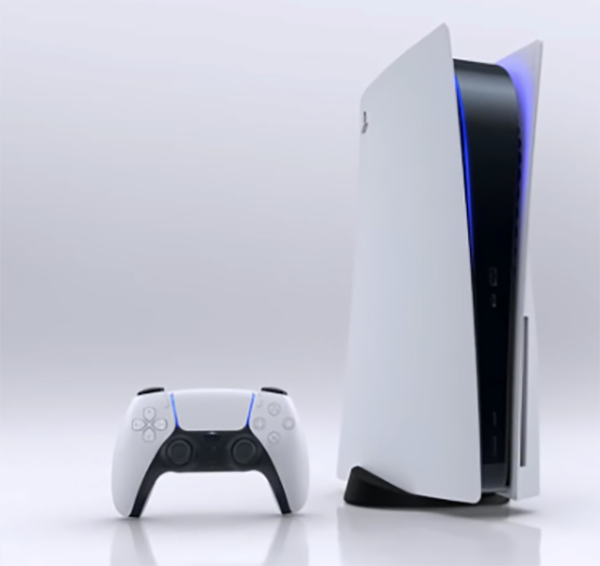 On sale tomorrow-- The new PlayStation 5 hits the stores on Nov. 12. It will be available in two versions and stands taller than any modern gaming system.

If the subtle rise of overplayed holiday songs on the charts hasn’t reminded you yet, Christmas is on the horizon. Undoubtedly, one of the most popular Christmas gifts this year will be Sony’s PlayStation 5, ringing in a new generation of the PlayStation brand of gaming console.

The console will launch on Nov. 12 of this year and will come with two models: a digital-only version for $399 and a standard model able to load game discs for $499. The cheaper one will only allow gamers to play digital versions of games, while the standard model will allow gamers to play both digital and physical games, as well as watch Blu-Ray discs. Both gamers and non-gamers have one question on their mind–what exactly is driving all the anticipation around this gargantuan piece of machinery that looks like a futuristic refrigerator?

To answer this question, we’ll need to take a peek inside the console itself. First, the PS5 itself is loaded with innovative technology that’ll make gaming easier and more fluid than ever. Its solid-state drive, or SSD, is one of the most powerful seen on the market today, reducing load times in games to a mere second or two. It also comes with tech allowing for other spectacles such as 4K visuals and 3D audio. The real downside to all of this is its size–the PS5 is absolutely massive, standing at 15.4 x 10.2 x 4.1-inches in size. The room needed to store all of that fancy tech means that the PS5 easily towers over other consoles and gadgets.

The PS5 also comes with an innovative new controller called DualSense. The controller has a powerful form of haptic feedback which will immerse players into whatever adventure they’re on at the moment. This isn’t too unlike the feedback on controllers seen on the Nintendo Switch. The console comes prepackaged with a platformer game known as Astro’s Playroom which brilliantly displays this technology. In this game, you can feel everything from grains of sand to the sensation of walking on ice with the controller’s sensitive feedback system. The controller even has adaptive trigger buttons that allow you to perform different actions depending on how forcefully you pull them. These triggers can even add resistance to themselves to simulate different scenarios within a game. Paired with 3D audio and 4K visuals, this tech is sure to draw you into any game world. There are concerns, though, over how exactly game developers will take advantage of this technology. Only time will tell if this technology gets used to its full potential.

Speaking of games, this console comes with a couple of launch titles available as soon as the console comes out. The launch titles for the Playstation 4 were rather unimpressive, consisting of zero triple-A titles and games that were basically glorified tech demos. The lineup of launch titles for the PS5, however, completely blows the PS4 out of the water. The most notable and advertised launch title for the PS5 is Marvel’s Spider-Man: Miles Morales, a sequel to the 2018 PS4 game Marvel’s Spider-Man. It’s an action-adventure game developed by Insomniac Games, in which the player takes control of a superpowered boy inheriting the title of Spider-Man to protect New York City. The game has a myriad of new features, my favorite being the ability to have a “Spider-Cat” that will accompany the player on their crime-fighting adventures. The game will take advantage of the DualSense controller’s new features to fully immerse players in its world. It’s rated T for Teen and will be released alongside the PS5 console itself. Other impressive titles are joining it, including the action-roleplaying game Godfall, the platformer Sackboy: A Big Adventure, the open world game Assassin’s Creed Valhalla, and a remake of the game Demon’s Souls.

The PS5 will also have backward compatibility with the PS4, allowing for some of the greatest games on the PS4 to be played with the impressive new hardware of the PS5. Some old PS4 games will even be receiving upgrades when they’re played on the PS5. Sadly, though, the PS5 does not have backward compatibility with the PlayStation 3 or any of its predecessors, upsetting gamers who wish to play their entire PlayStation library on one device.

One can’t mention Sony’s PlayStation without mentioning its long-lasting rivalry with Microsoft’s Xbox. The new Xbox Series X will be released on Nov. 10 before the PS5, competing with it for the attention of gamers. It’ll come at around $500, the same as the standard model of the PS5. The core components of each console are similar, and they’re both powerful in their own right. Ultimately, the factor that divides the two consoles is their games. The most notable title the Xbox Series X will launch with is Halo Infinite, a long awaited new title in the Halo series. The Xbox Series X will also be able to play Xbox One games as part of backwards compatibility, as well as select games from the Xbox 360 and the original Xbox. It’s difficult to make a decision on what console is superior in the early stages of a console generation, so it’s up to the future to decide which console will sell more and become more beloved. Popularity-wise, however, the PS5 and its innovations in immersion are definitely doing a better job at capturing the attention of gamers.

Once you see how the PS5 is changing the game in comparison to its predecessors, it’s easy to see why it’s so anticipated. If you plan on grabbing one this November, you will need to be quick, as they’re projected to sell out almost as immediately as they’re available, a drawback commonly seen in every new popular device. It’ll be a worthy investment, however, as the innovative immersiveness of the PS5 will let you escape the insanity of our current day.